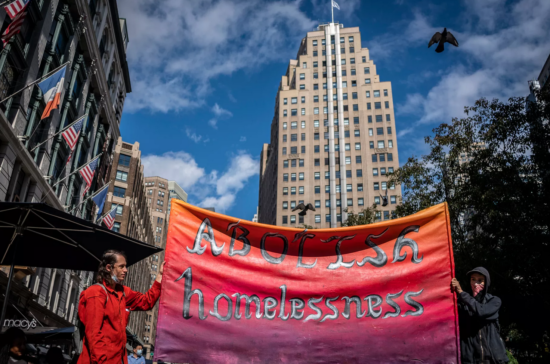 This article was originally published on Oct 23 at 12:05am EDT by THE CITY Homeless men and women were left to languish in packed hotel rooms and shelters as COVID-19 raged in New York City, putting them at heightened risk of serious illness, a new lawsuit demanding relief charges.

The suit, filed late Thursday by the Legal Aid Society and the law firm Jenner & Block, calls on the city to provide single-occupancy hotel rooms to “every single adult homeless New Yorker until public health authorities determine it is safe to return to congregate settings.”

The homeless men and women claim in their complaint that jamming as many as 11 people in a shelter bedroom put them at increased risk of infection.

Some shelter residents named in the suit told THE CITY they share bedrooms and bathrooms despite having severe underlying medical conditions — such as cancer, hepatitis C, asthma and heart disease — that put them at higher risk of fatal COVID infections.

“I’m not safe at all,” said one of the plaintiffs, who lives in a downtown Manhattan women’s shelter and shares a room with 10 other women — and a bathroom with as many as 20 — despite her high-risk health conditions, including diabetes.

“I know a second wave is going to come bigger than the first one, and I don’t feel safe where I am,” she added.

The suit, filed in Manhattan Supreme Court, cites the city, its Department of Homeless Services and administrator Joslyn Carter, along with her boss, Department of Social Services Commissioner Steven Banks.

DHS says it has placed as many as 13,000 out of the nearly 18,000 adults in the shelter system into hotels — most visibly at the Lucerne, an Upper West Side hotel where a legal battle has ensued over whether the men staying there may remain.

But in many instances, homeless hotel residents are sharing rooms — even when they have medical conditions that local health guidelines say should entitle them to private rooms, the lawsuit contends. Homeless people were packed into the 30th Street Men’s Shelter in Manhattan in May. Obtained by THE CITY.

Rather than automatically put anyone with a qualifying medical condition in their own room, the lawsuit claims, the individuals must ask for a special placement. Many are not aware the option is available, according to the suit.

The suit alleges that the city’s “refusal” in many cases to place homeless adults in single occupancy rooms to protect their health violates the state constitution’s guarantee of “aid, care and support of the needy.”

Past landmark lawsuits successfully used that same provision to guarantee a right to shelter for homeless people in New York City. Among the attorneys who sued to advance that right was Banks, who was a top Legal Aid attorney before becoming the architect of de Blasio’s homelessness response.

Banks’ agency, the Department of Social Services, has not yet commented on the COVID suit.

Attorneys say the decision to file the lawsuit marks the culmination of months-long frustrations with city agencies during the pandemic.

“We gave a lot of opportunities to try to resolve this,” said Joshua Goldfein, who leads the Legal Aid Society’s Homeless Rights Project.

“We’re facing right now a potential resurgence of the virus and everyone is being asked to do what they can in order to appropriately social distance,” Goldfein added. “We’re asking for the city to allow homeless adults to isolate in the same way that they ask others.”

The Coalition for the Homeless, which is also a plaintiff in the suit, estimated in June that shelter residents were 61% more likely to die of the coronavirus than the city population as a whole.

People staying in those shelters described sharing their bedrooms with multiple other people and bathrooms with an entire floor as the virus raged this spring.

Among them is plaintiff Gary Corbin, who abandoned his city-provided hotel room because of concerns about his vulnerability to the illness stemming from his hepatitis C and from past cancer treatment, according to the lawsuit.

Corbin — feeling unsafe with a roommate whose actions “exposed him to a high level of risk of contracting [COVID-19] and negatively impacted his mental health” — requested a single occupancy bedroom, which the city denied, the suit alleges.

He is currently living on the streets, having burned through his monthly disability benefits to fund his own private hotel stays, according to the lawsuit.

The suit also charges that the city is in violation of the Americans with Disabilities Act for “failing” to provide reasonable accommodations to all qualifying individuals who request a single room due to their medical conditions.

Federal health guidelines for homeless shelters recommend that “non-group housing options (such as hotels/motels) that have individual rooms” should be considered and put in use depending on a jurisdiction’s available resources, THE CITY reported in May.

One of the plaintiffs, Tamara Williams, shares a shelter room with 11 other people, despite having a heart condition and chronic obstructive pulmonary disease, the suit says.

And B.J. Athill, also named in the suit, shares a Manhattan hotel room with one unrelated individual despite having a respiratory illness. Athill commutes to his job at a downtown grocery store several times a week.

Despite his fears of illness, the lawsuit claims, “staff at Mr. Athill’s shelter never notified him that he could request a reasonable accommodation to be transferred to a single room.”

But even some of those with qualifying medical conditions who requested accommodation didn’t get it, the suit claims.

Another plaintiff, M.F., who asked not to be named, described sharing her dorm-like bedroom with 10 other women in her downtown Manhattan shelter and a bathroom with her entire floor — 20 women in all. That bathroom, she told THE CITY, has two showers and one bathtub.

The 55-year-old has diabetes and a breathing disorder, and works as a home health aide for an elderly couple on the Upper East Side.

The shelter beds, she said, “are set up like office cubicles,” which allow little privacy or opportunity for social distancing. And the bedrooms on the sixth floor of the shelter and parts of the fifth floor have bed bugs, she told THE CITY.

At the shelter, residents are not screened for COVID-19 symptoms, she told THE CITY. If anyone has tested positive for the illness in the time she’s been there, “No one’s ever told me,” she said.

When she requested access to a private room and bathroom for social distance, she said, shelter staff allegedly responded by telling the woman, who has bipolar disorder, that the Department of Homeless Services “does not put crazy people in hotels,” according to the lawsuit.

“I really hope this lawsuit changes things, a tremendous amount of change is needed,” she said. “It’s inhumane. The conditions they have in this place are inhumane.”

THE CITY is an independent, nonprofit news outlet dedicated to hard-hitting reporting that serves the people of New York.