West Side Rag » The Lucerne Case Will Set A Precedent, Lawyers Say; But What Will The Precedent Be? 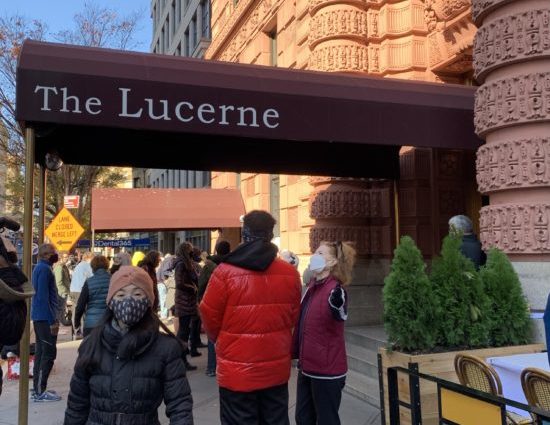 The fate of about 200 men experiencing homelessness who are currently being sheltered by the city at The Lucerne hotel on West 79th Street and Amsterdam Avenue, will soon be determined by a panel of five judges from the New York State Appellate Division.

“The decision should come in the next few weeks,” said Randy Mastro, the attorney fighting to allow the city to move the men to another hotel in the financial district. Michael Hiller, representing those who would have them stay, said, “This will be a precedent-setting case for New York City.”

But what will the precedent be? WSR talked to both attorneys by phone about their positions and the implications of the forthcoming decision. “I think it would be a devastating precedent if homeless individuals could go to court to force the city to temporarily house them in the venue of their choice,” said Mastro (pictured at right). “The city needs the flexibility to be able to make these moves, even more so in a pandemic.”

”I argue against the dangerous precedent that would be set if we were to lose,” Hiller said, “namely, that a group of wealthy neighbors can hire a politically connected lawyer and forcibly evict homeless residents from their community.”

Mastro is politically connected. He was a deputy mayor under Giuliani. He freely admits that, on behalf of his clients, he wrote a letter to Mayor de Blasio and other city officials in late August, urging the mayor to do something about conditions relating to homelessness on the Upper West Side, which were unacceptable, he said, particularly around The Lucerne.

“Unbeknownst to me, the mayor himself went to visit the neighborhood, went to The Lucerne,” Mastro recalled, “and saw with his own eyes the conditions there, and announced at a press conference the following week that they were ‘not acceptable,’ and he was going to move the men.” “Ridiculous,” Mastro responded. “This isn’t a matter of constitutional rights. This is a question of the City having the legal authority and discretion, during a pandemic, to determine where it is most appropriate to house the homeless. The city has the right by state law, city law, and by executive order to do so.”

“We aren’t saying that homeless residents get to pick where they live,” Hiller said. “We are saying that when the mayor is using emergency powers, as he is during the pandemic, he must do so in way that is rational. Our position is the decision here was made for purely political reasons.”

“He went to the Lucerne and the neighborhood, saw what was going with his own eyes, and made a decision,” Mastro repeated. “What could be more rational than that?”

There are good reasons justifying both sides of the argument. On the side of moving the men, according to Mastro, the downtown hotel is a “more appropriate and safer facility,” where each man would have his own room, as opposed to being doubled up in The Lucerne, and where there is more space for recreation and socializing. The men’s health, addiction, and psychiatric services are also only 10 blocks away, whereas they are over 100 blocks from The Lucerne.

On the side of keeping the men at The Lucerne: there’s been a turnaround after a rough start, due largely to the efforts of community groups, local nonprofits, elected officials, and individuals, who have reached out and supported these new neighbors, with kindness, services, and, even, jobs. Though the transitional month was rocky, the men now appear to be integrated into the neighborhood — with the occasional, publicized upset. Moving them would cause “irreparable harm,” Hiller said.

On that note, since October, when Hiller filed his lawsuit, 54 residents of The Lucerne have transitioned to permanent housing. That is, after all, the point.

“I genuinely believe that the city is expediting the transition process to moot the lawsuit,” Hiller said. “Two out of three of my clients were transitioned into permanent housing. If that’s what motivates the city to end homelessness, I’ll sue the city every day.”

Hiller also said that if the court rules in the city’s favor, his side won’t appeal. It would make no sense, he explained, as the men would have already been moved, and The Lucerne will have been closed.