West Side Rag » Two Challengers Take on Jerry Nadler; We Asked The Candidates Some Questions 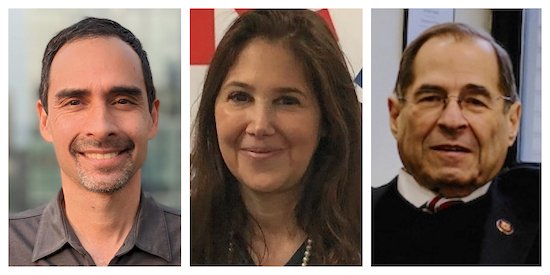 After emerging unscathed from the June 23 Democratic primary, Congressman Jerrold Nadler (D-NY) faces two challengers in the upcoming general election for New York’s 10th Congressional District, which covers the western reaches of Manhattan (including, of course, the Upper West Side) and parts of central Brooklyn. Nadler, a fifteen-term representative with a significant national profile, retained his seat with 82.1% of the vote in 2018.

The other candidates on the ballot are Cathy Bernstein, running on both the Republican and Conservative Party line, and Michael Madrid, representing the Libertarian party. (The Independent candidate, Jeanne Nigro, did not make the ballot and withdrew from the race.)

The Rag sent the following short questionnaire to all three candidates:

Why are you running?

If elected, what would you do differently than the incumbent?/(For the incumbent) What are you planning for your next term?

Who are you voting for in the presidential election?

Their answers are below. Madrid did not respond to multiple requests for comment.

Why are you running?

“In America today, there is so much hurt and pain and anger. More than 225,000 lives have been lost in a pandemic.  40 million people and counting have lost their jobs and, as a result, their health care, too.  And the murder of George Floyd by the brutal force of a Minneapolis police officer’s knee ignited rage and protests all across the country. As well it should.

While the headlines may be new, the underlying issues are not. And we have a President in Donald Trump who is unfit for office, who disgraces the country, undermines our values, fuels divisions and displays cruelty and immorality in his words and deeds.

But important as it is that we defeat Donald Trump the change we need goes far beyond that.

It’s going to take all of us, together, to demand policies that get workers the wages they deserve and Medicare for All, because health care should be a human right.

It’s going to take all of us to counter racism — to show that black lives truly matter.

It’s going to take all of us to ensure that our government deals with climate change as the existential threat it is.

And it’s going to take all of us to protect and defend the rights of our neighbors, regardless of race, age, ethnicity, religion, sexuality or gender identity.

For all of us who care about creating a more just and more a progressive America, there’s so much work to do. I hope you’ll give me the chance to keep leading the fight and vote for me for re-election on November 3rd.”

Who are you voting for in the presidential election?

“I’ll be voting for Joe Biden and Kamala Harris of course.  But I ask that you join me in voting for them and me on the Working Families Party (WFP) line. I’m a loyal member of the Democratic Party. But as a WFP candidate myself, I also recognize that keeping the Working Families Party (WFP) strong is part of our fight to ensure New York leads on progressive issues in Washington and Albany.”

“I am running for Congress in the 10th Congressional to raise awareness on issues directly affecting the UWS in terms of housing affordability and the pressing issue of the homeless.

Building in New York, and promoting growth in our city, should not come at the steep cost of preventing working class families from living in and engaging with our community. We must find the intersection between promoting positive and uplifting development for our community while balancing the negative externalities of increased prices and general unaffordability.

Eliminate the $10,000 Cap on SALT Taxes that hurt New Yorkers and erode property value. Residents of NYC already pay some of the highest tax rates in the country. Those in Congress should be arguing for what is best for his or her constituents, regardless of party affiliation.

Promoting (10%) Federal Rent Tax Deduction for families making under $100,000 adjusted gross income in the current tax year to help with the ever-increasing cost of living in the city. In the 10th Congressional, more than half of the population are renters. A permanent Federal Rent Tax Deduction of 10% will offer the same benefits to renters as to homeowners, and help aid the poor, working and middle class to save for the American dream of home ownership.

The pressing issue facing our community is homelessness. NYC has the largest homeless population in the country with estimates per July 2020 of over 58,000 children, women, and men. The UWS has two exceptionally large homeless populations.

The first population lives on the street and are suffering from mental illness and/or substance abuse issues. While every homeless person is offered assistance, many of them refuse help. Self-medicating to drown out the voices, they live in an endless cycle of drugs and psychosis.

The second large homeless population is housed in shelters and hotels. Regarding hotels, we now have the game of hot potato and the moving hotels.

Homeless who suffer from substance abuse issues require a closed hospital setting where they can get proper treatment to detox.  Putting men with severe drug issues into hotels where they are not required to attend any drug treatment does not help them overcome their addiction and the senseless deaths from overdoses at the hotel bears that out. It also hurts a neighborhood community where children have witnessed shooting up and drug deals.

The city has spent $299 million so far on housing the homeless in hotels averaging around $31,000 per person.  For those who need affordable housing, those dollars could have been better spent on an apartment.

A significant increase in federal funding for the 10th Congressional. Work immediately with HUD/FEMA for special emergency measures to increase the budget for the homeless.

Compassionately help the Homeless to move off the streets to affordable housing, drug and alcoholic treatment centers, and psychiatric hospitalization for those who suffer from schizophrenia and bipolar episodes.

Eliminate the IMD Exclusion Rule of Medicaid Permanently which restricts any use of Federal Medicaid funds to pay for psychiatric care hospitals known as “Institutions for Mental Disease” for individuals from the age of 22 to 64 unless the facility has 16 beds or less and/or the stay is 15 days and less).

Enforce Kendra’s Law – Courts can order individuals with serious mental illness who are a danger to others or themselves to stay in treatment.

The Rag did not receive a response on who Ms. Bernstein will be voting for in the presidential election.