What Manna Café Director learned from being homeless for 14 days 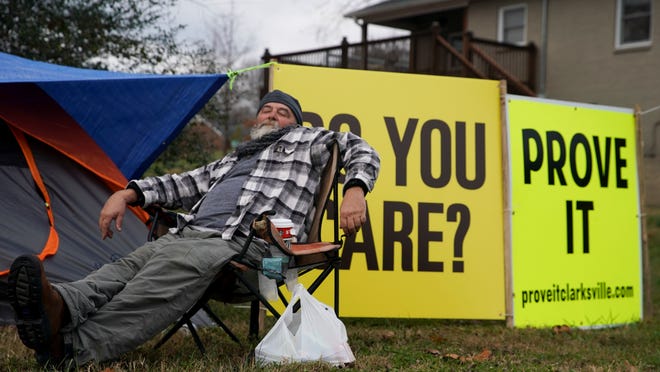 1996: Kenny York became homeless during his divorce from his first wife, a life-altering experience which forced him to spend nights on a mattress in the back of a pickup truck.

More than two decades later, York, now 58, returned to the streets for a different reason.

If you passed by the corner of Pageant Lane and Madison Street in Clarksville in recent weeks, you may have seen York. You may have noticed the 9×9 camping tent he slept in, warmed only by cups of coffee or hot chocolate.

Maybe you didn’t notice him at all, which is why he was there.

York, the director of Manna Café Ministries, lived on the streets of Clarksville for 14 days in December to raise awareness about homelessness in the community.

Getting a homeless shelter built in Clarksville.

So he slept in a tent covered in frost after a 25-degree winter night. He plastered his campsite with neon signs to ensure inquisitive locals got the message.

On any given night, York said there could be 400 homeless people on the streets of Montgomery County, from downtown alleys to cars parked in suburban parking lots.

And these people, unlike York don’t have a choice.

“Realize that could be any of us,” York said while sitting in a folding chair with a bag of snacks nearby.

“I’m just out here trying to start that conversation. If you care about it, prove it .. make some change.”

Chilling winter nights, full of rain, and days without hot food — York wrote about his experience to share with people interested in gaining more insight.

On December 1, Kendra Owen drove by the Veterans Plaza. She noticed York’s “Prove It Clarksville” signs. Owen and her children brought hot chocolate and snacks.

“I think that a lot of times, we just put a label on homeless people,” Owen said. “They are forgotten about. If we don’t give because we’re afraid of where our money is going to go or where our time is going to go … then people who really need money (are) going to get left behind.”

York made a blog post about an eye opener during his journey:

Something I’ll take away from this leg of the journey is this: it’s exhausting to be cold all the time: mentally, physically, and spiritually exhausting. And when you get warm, you can’t stay awake. I have a new understanding of the homeless person napping in the sunlight on the park bench: they’re not necessarily lazy at all. There’s a good chance they’re warm for the first time in hours, or maybe days.

York wrote about how vulnerable he became due to being out of his element. “I’ll never look at the sunrise the same,” he said, also acknowledging how grateful he was to see sunny mornings weigh out gloomy nights.

I’m fifty-eight years old, but I know I’ll never look at a sunrise the same way again. It’s about more than “the big light” coming on. When the sun comes up it brings joy, warmth, hope, and life along with light. Thank you, God, for removing the scales—the insulation—from my eyes so I can see things in a new way.

“This is the hardest thing I’ve ever done. By far.”

It was as if York struggled to re-enter society after his 14-day experience placed him in a mental fog.

“This is the hardest thing I’ve ever done. By far,” he said. “Now imagine if you’ve been living like that for months or even years?”

2021-01-01
Previous Post: Ghislaine Maxwell denied bail by U.S. judge
Next Post: Other View: Prosecuting the victim in a sex-trafficking and murder case | Columnists