While most states got thousands of people sleeping rough off the streets during COVID-19, Western Australia wound back its response 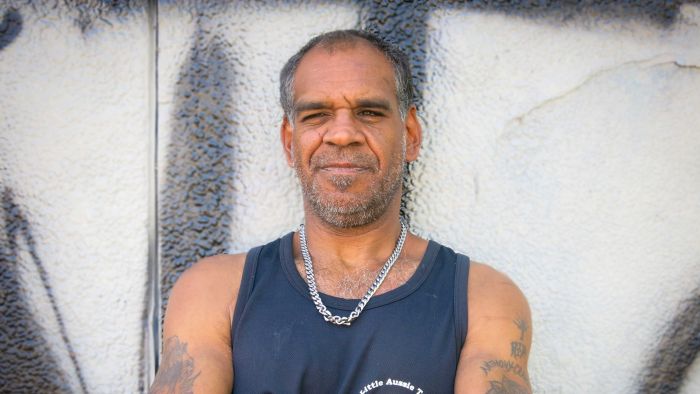 The thin walls of Neville Riley’s makeshift tent don’t do much to block the constant sound of passing cars and trains.

His is one of about 30 tents set up on a patch of sandy soil on the outskirts of Perth’s CBD, bordered by an overpass, a stormwater drain and the railway tracks.

On a wall nearby are the words: “Welcome to Tent City.”

“No other name we could come up with,” said Mr Riley.

A 45-year-old with arms covered in prison tattoos, Mr Riley said it is not safe in Tent City.

“It gets cold, you got rubbish lying around, we got no bins down here — not even toilets for the ladies to go to the toilet, there’s no washbasins of no sort.”

“It’s just like living in the jungle with no security of any sort at all.”

When the pandemic hit Australia, most states got thousands of people sleeping rough off the streets and into emergency accommodation like hotels and backpackers’ hostels.

But when the virus failed to gain a foothold in WA, the State Government wound back its response. It stopped looking for emergency COVID-19 accommodation in places like hotels and rec centres for people like Mr Riley.

WA Minister for Community Services Simone McGurk said her Government’s response was more of a trial.

“We were ready to do more but we didn’t need to,” she said.

“It was really a health response to make sure that we had eyes on whether that would be effective if we needed to get people off the street quickly.”

But leaked correspondence seen by the ABC’s Background Briefing program shows how many of the state’s NGOs believe that response was an incredible missed opportunity.

Catch up on the main COVID-19 news from October 24 with our coronavirus blog.

Tent City is the place that put homelessness on Perth city’s political agenda but it’s just the most visible sign of a problem that’s been simmering in towns across WA for years.

There are more than 15,000 households on the public housing waiting list in WA.

A few years ago, that number went down but it’s on the rise again this year.

Subscribe to the Background Briefing podcast to listen to Australia’s best investigative journalism, with a new story every episode.

Space to play or pause, M to mute, left and right arrows to seek, up and down arrows for volume.

“You forget about things like that there because you’re waiting too long,” he said.

“How long are we going to wait for? Why do we put ourselves in a newspaper? Why do we talk to the media? Why? Because we’re homeless.”

When COVID-19 hit Adelaide, Sydney, Melbourne and Brisbane, more than 7,000 people were given shelter.

Those cities’ councils and state governments used the pandemic to rethink their approach to homelessness.

But in Perth, just 24 people were placed in a CBD hotel, while another 47 were put up in a youth and recreation centre.

In one letter co-signed by 22 organisations working in the homelessness sector from April this year, the response is labelled “reactionary and uncoordinated and not informed by the collaborative work undertaken in good faith”.

One of the signatories was Amanda Hunt, the CEO of Uniting Care West.

“We were agitating for radical change because of the old adage [about] an opportunity and a crisis, thinking that, you know, perhaps if we thought differently, we could actually come up with a solution that hadn’t been thought of before,” she said.

“At the time, we were all feeling like there had to be a better way.”

That sentiment was reiterated one month later, in another letter seen by Background Briefing, by representatives from Shelter WA and the WA Alliance to End Homelessness.

“It [is] telling that it has been the comparable Departments of Communities and/or Housing in QLD, NSW, VIC and Adelaide that have proactively facilitated hundreds and hundreds of rough sleepers to get off the street, fast-tracked strategies funded and put in place to then secure longer-term housing options,” the letter reads.

Its authors warned they were witnessing an escalation of anxiety and mental health issues in those sleeping rough — and it wasn’t good enough for the Government to blame a lack of available accommodation.

“We [are] concerned that the current position of government is not to take people off the streets unless there are housing options they can go to.

“We noted your comment that this position has been crafted in part as a response to the acute shortage of social housing.

“This is a challenge other states face also, but the re-purposing of vacant accommodation, fast-tracking of repairs to vacant public housing and innovations such as rental subsidy are among measures that are being rolled out.”

Ms Hunt said they wanted the State Government to take the next step.

“What we really wanted was a commitment to more housing.”

But at the same time, it’s also demolishing old ones.

Since Labor came to power in March 2017, the total number of available houses actually went backwards by more than 1,000.

“That has been an absolute challenge,” said Ms McGurk.

“Some of the areas where we’ve decommissioned some of the housing stock is because it was so old and completely unacceptable.”

It means that although the Government is investing in addressing homelessness, it’s still struggling to provide long-term housing solutions for people like those shacked up in tents next to the train line.

“I’m confident that with our housing-first policy, with new builds in social and public housing and working in partnership with the community sector, we can start to make a difference,” said Ms McGurk.

“Having said that, people who are street-present and the sort of congregations or tent cities which we’re seeing in East Perth at the moment aren’t acceptable.”

“If need be, [the Government would look at] emergency accommodation for those people. So they’ve got a safe place, a roof over their heads and the proper supports that they need.”

If Tent City is the most visible sign of homelessness in WA, forced evictions are one of its hidden causes.

After COVID-19 arrived, the State Government put in place a moratorium on evictions from private and public housing.

In spite of this, people were still being forced from their public housing homes.

Dorinda Abraham was one of those facing eviction.

Lately, life for Ms Abraham and her extended family has become much more complicated.

A few months ago, her two sisters Hayley and Margaret moved into her house along with their kids.

They were escaping violent partners and had been evicted from their own houses.

Now, 13 people are living in her house.

On top of that, after a long series of neighbourhood complaints, the WA Department of Housing served Dorinda with an eviction notice.

Ms Abraham decided to fight it in court and on Wednesday had her case adjourned until next year.

Jesse Noakes, a legal advocate who has represented both Ms Abraham and her sister Margaret in their fight against eviction, said her case is still very much up in the air.

“I would hate to see the same thing [as happened to her sisters] happen in Dorinda’s case,” said Mr Noakes.

“It would be the third sister in three years to lose her home to a three-strikes eviction, and this time they’d all be out on the street.”

“It would really be ‘three strikes, you’re out’ in this case.”

In recent years, WA has evicted tenants from around 600 public housing properties per annum.

Most of those are for unpaid rent but others are for disruptive behaviour, under what’s called a three-strikes eviction policy.

But finding a new place will be near impossible for anyone who loses their home.

With COVID-19 under control, the economy back up and running, and sections of the mining industry at full steam, there’s been an influx of people returning to Perth.

“We’ve got a private rental market that is at an all-time low. The vacancy rate is approaching just 1 per cent. Listings are down more than 50 per cent on this time last year.”

Racism and discrimination have also been found to be widespread in the private rental market.

“So for people who are already locked out or who are facing the door like Margaret and Dorinda, trying to get back inside anytime soon is like climbing Everest with a blindfold for an Aboriginal family to access the property market in WA at the moment.”

Stay up-to-date on the coronavirus outbreak

Betsy Buchanan, a veteran advocate and a colleague of Jesse Noakes, said if the Government is serious about addressing the problem of homelessness, the first step should be stopping the evictions.

“The Government evicts hundreds of people every year and with Aboriginal people, that would be dozens and ultimately thousands of children.

“That just creates a crisis that’s just rolling on and rolling on”, she said.

The WA Department of Housing said in a statement that it doesn’t comment on individual cases and that it doesn’t keep statistics on the overall number of children evicted from public housing.

“How can you possibly end homelessness when you’ve got a department that is supposed to be housing people, that is basically committed to un-housing them?”