Why it took police so long to arrest 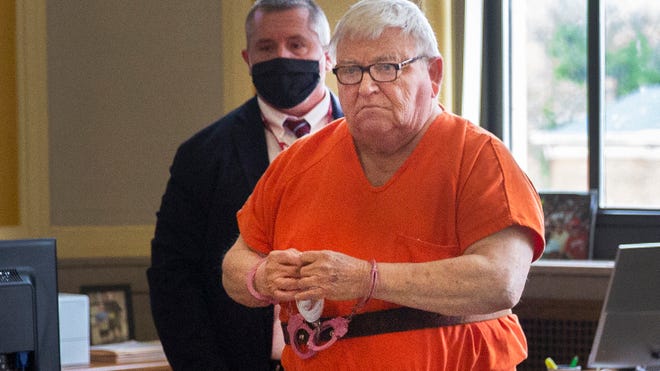 Knock on any door in town, Heather Boots says, and they’ll tell you Michael Mearan has been rumored to traffic women out of Portsmouth, Ohio, for years.

Boots, 40, was abused for at least a decade herself. She says it began when she was a teenager, and to this day says she knows of possible current victims.

Mearan’s attorney, Richard Nash, alluded to the “sensationalism” of the allegations during Mearan’s Oct. 26 arraignment.

“This has been no secret,” Nash said.

There haven’t just been rumors. There have also been numerous, previous investigations that Portsmouth Police Chief Debra Brewer says led detectives to “dead ends” over the years.

Mearan, an attorney and former Portsmouth city council member, was arrested Oct. 23 on 18 charges spanning human trafficking, racketeering and compelling and promoting prostitution. He was the focus of an Enquirer investigative report in March 2019 into sex trafficking in the small city 100 miles east of Cincinnati along the Ohio River.

The Enquirer spent 15 months reporting on the initial story. After it was published, it took nearly 20 more months before Mearan was arrested. Between those dates, reporting continued on a second alleged sex trafficking ring in Portsmouth, and other investigations of some of the men implicated in prior reporting were initiated by the state of Ohio.

More: ‘It was a happy day’: Michael Mearan pleads not guilty to sex trafficking. Bond set at $300,000

Mearan has consistently denied the allegations, although the Portsmouth mayor, police chief and Scioto county prosecutor have all admitted to hearing stories themselves.

People in town say Mearan was never going to be taken down by the local government. It took state investigators and a special prosecutions team to arrest him.

His arrest is the first step toward justice for the women who accuse him of selling them for sex. But the question remains, for his alleged victims and others in Portsmouth who have speculated for years: Why did it take so long?

Brewer said there have been a handful of times that informants have come forward with allegations against Mearan. She describes a process that followed each time, leading to empty results.

She said victims might talk at first, but eventually, they would essentially ghost investigators by moving away from the area, or would just stop talking altogether.

The Enquirer experienced this, too, when reporting for its March 2019 story.

“I’m not sure why that happened, as to why they broke contact or why they would move away,” Brewer said. “So I don’t know exactly what happened there. But I do know that it was tried several times to get it started, and it just never went anywhere.”

Without a victim, Brewer said, there is no case to prosecute.

Scioto County Prosecutor Shane Tieman explained further, stating they need to be able to prove beyond a reasonable doubt that the charges are true. That takes more than one confession, he said.

“It’s important that the investigations take as long as they need to and not a second longer,” he said. “But that they’re thorough.

“I’m not going to excuse it. Frankly, if this was going on three decades ago then we should have gotten something done then.”

Brewer said victims are often fearful of the consequences of coming forward and potential repercussions from their abuser.

“And I think that’s what happened the last time, is they got scared,” Brewer said.

There aren’t just potential repercussions to the victims, Brewer said. Bringing a case to court without substantial evidence could be “detrimental” to the police department, to the City of Portsmouth and could give Mearan the grounds for a lawsuit.

Especially with someone who was a prominent individual in the community, she said.

The task force worked closely with the Scioto County Prosecutor’s Office, Irwin said. The case is being prosecuted by state prosecutor Jennifer Rausch as part of the Attorney General’s Human Trafficking Initiative and Special Prosecutions section.

Tieman said a “trust” was developed between the community and the officers this time around.

“It was a crusade at that point to really bring this to light, to really do something,” he said.

Tieman also suggested Yost’s office handle the prosecution to ensure “the public is confident in the legal system.”

Yost declined an interview request with The Enquirer for this story at this time – Irwin said the office typically does not conduct interviews on pending cases.

However, Irwin provided the following statement to The Enquirer on Nov. 13:

“Human trafficking investigations and prosecutions are complex – especially when a trafficker has a strong grip on their victims like in the Mearan case. Human traffickers control their victims through exploitation, drugs, violence and threats; creating a bondage that is difficult to break without intervention from law enforcement.

“The unique facts of this case also expanded the scope of the investigation – for example, a March 2020 search warrant executed on Mr. Mearan’s office produced thousands of documents that were required to be reviewed by investigators. Likewise, Mr. Mearan’s profession as an attorney gave him intimate knowledge and access of the criminal justice system, further entangling his victims. The task force worked diligently to build trust with the victims in this case while thoroughly investigating a web of crime and corruption.

“We continue to press forward to the day when his victims get their day in court.”

The case is a shock to nearby counties

The length of time Mearan was allegedly able to traffic women without being caught shocks him.

“I can understand why people outside of law enforcement or outside the criminal justice system would scratch their heads and ask, ‘Why did it take so long?’ ” Allen said. “And it’s a legitimate question.”

He said Mearan’s position in the community likely “played a big role.”

“In a small county, criminal defense attorneys many times are friends with law enforcement or at least have a friendly relationship,” Allen said. “Maybe sometimes people look the other way. The sheer magnitude of this and how long it’s gone on give people pause.”

Portsmouth has a population of about 20,000 people, and the whole of Scioto County is home to about 75,000 people. Columbus is the closest big city, which is over 90 miles away.

Allen said that he couldn’t see something involving such a high profile lawyer like Mearan happening for so long in a more populated area like Hamilton County.

As for a more recent Drug Enforcement Administration investigation and two years or so it took the state to charge Mearan, Allen said these cases are complicated.

In the case of the DEA, he said if they had enough evidence to charge Mearan, he thinks they would have.

“They are totally apolitical,” Allen said. “They don’t care how big a wheel this guy is in his home town. If there was probable cause to believe he violated federal statutes, they would have indicted him.”

He said there’s a chance that Mearan cooperated with the DEA to avoid charges, but felt like that was an unlikely scenario given what the DEA had written about him sealed federal documents. One of those documents, filed in August of 2015, laid out the alleged sex trafficking scheme.

Brewer has a message for victims of human trafficking in her city: “There’s always someone that will listen.”

She says she understands that some victims may feel more comfortable speaking with women officers and says they will accommodate to make complainants feel safe. There are five women in the department, including herself, she said.

“Come forward,” she said. “Especially children. If you know some child that this is happening to, please bring them to us. We want to take care of this. We do not want this happening to our citizens.”

Brewer says the “consensus” in town is that Mearan will get off on these charges, because nothing has ever been done in the past.

“I seriously hope that that is not the case,” Brewer said. “I think that they have enough in their investigation to convict him. But there is a jury that has to determine that.”

In the meantime, Mearan is out on a $300,000 bond posted by Jim Peach Bail Bonds five days after his arrest.

“I wouldn’t be surprised if women doesn’t end up coming up missing more because they allowed to release him,” 35-year-old Linda Mills, one of the alleged victims in The Enquirer’s investigation, said. “I just fear for so many women’s lives today.”

Brewer admits there was a “shock” among local law enforcement at how low Mearan’s bond was. But she said she does not believe there is a danger to the community since his release.

“He’s already been arrested on this and it would be, I think (people) would be more aware and less likely to be around him,” Brewer said. “At least, I would hope so.”

2020-11-27
Previous Post: Local nonprofit serves Thanksgiving dinners to those most in need in North Long Beach – Press Telegram
Next Post: Who Is Most At Risk And Warning Signs For Spotting Child Sex Trafficking – NBC 7 San Diego