Woman Spit on Homeless Man Because He Asked for a Cigarette 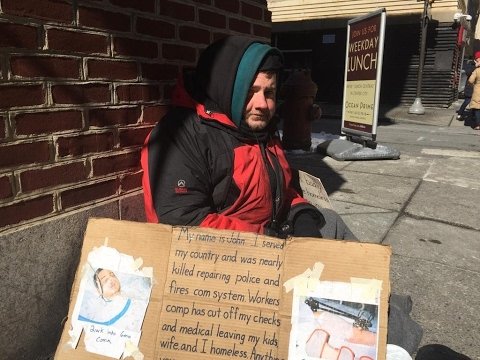 John is sleeping outside in Philadelphia. He tried shelters, but someone stabbed John trying to steal his boots, so he feels safer sleeping on the streets, even though the overnight wind chill is reported to be a deadly -11° or worse.

John had a great job in the telecommunications industry fixing police and fire communication systems. He fell on the job, which resulted in serious injuries. John was in a coma for some time, and he claims his homelessness is a result of insurance industry abuse. Clearly, John is disabled, yet has not been approved for disability benefits. John is vulnerable, and he should not be on the streets – period!

Moments before we met John, a woman spit on him simply because John asked her for a cigarette. Like most urban centers anymore, downtown Philadelphia is filled with large groups of homeless people nestled up alongside fancy restaurants, pricey shopping, and executive offices. This mixture of two extremely different socioeconomic classes can be volatile at times. I don’t agree with this woman’s actions, but something in the past, aggressive panhandling or an intoxicated homeless person verbally assaulting her could have influenced such awful behaviors. We must get people experiencing homelessness the help they need, and we need more funding for educational and awareness campaigns to change public perceptions about homelessness.

There is a direct correlation between what the general public perceives about homelessness and how it affects policy change. Most people blame homelessness on the person experiencing it instead of the increasing shortage of affordable housing, lack of employment, childhood trauma, lack of a living wage, or the countless reasons that put a person at risk. This lack of understanding creates a dangerous cycle of misperception that leads to the inability to effectively address the root causes of homelessness.

We imagine a world where everyone has a place to call home. Each day, we work to fight homelessness by giving it a face while educating individuals about the systemic issues that contribute to its existence. Through storytelling, education, news, and activism, we are changing the narrative on homelessness.

This isn’t just talk. Each year, our groundbreaking educational content reaches more than a billion people across the globe. Our real and unfiltered stories of homelessness shatter stereotypes, demand attention and deliver a call-to-action that is being answered by governments, major brands, nonprofit organizations, and everyday citizens just like you.

However, there is more work to be done on the road ahead. Homelessness is undoubtedly one of our biggest societal issues today and will only continue to grow if we don’t take action now.

Invisible People is a 501(c)(3) nonprofit dedicated to educating the public about homelessness through innovative storytelling, news, and advocacy. Since our launch in 2008, Invisible People has become a pioneer and trusted resource for inspiring action and raising awareness in support of advocacy, policy change and thoughtful dialogue around poverty in North America and the United Kingdom.

2021-06-08
Previous Post: Rockford expands services for survivors of all types of violence
Next Post: Cute Monkey baby too hungry milk wait mommy give