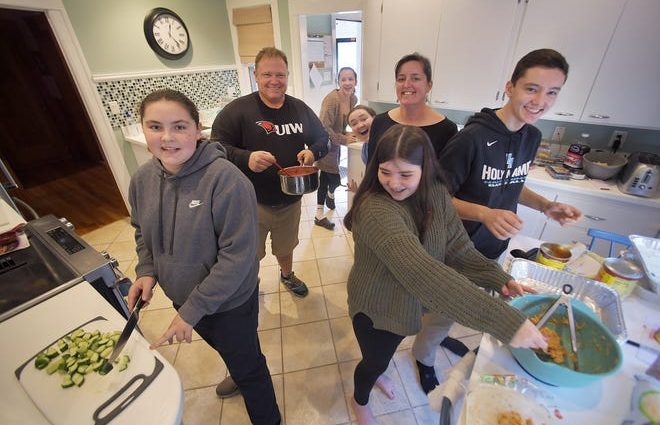 As a family, Dennis and Mary O’Connor and their children cook dinner at their home near Tatnuck Square on Sundays and serve it to homeless people, from November through March, through Net of Compassion. Two years ago, they began serving at St. John Church, then at North High School’s gym and now at Ascension Church.

The O’Connors got involved as part of a service project for daughter Maggie at Holy Name High School. Maggie, 18, used to cook, clean and serve, but this fall she began her freshman year at the University of the Incarnate Word in San Antonio, Texas. The rest of the family has continued the Sunday tradition without her.

“The No. 1 reason I do it,” Dennis said, “is I want to teach my kids the importance of being a part of something and giving back.”

“I like it,” said 16-year-old Terry, a junior at St. Paul Diocesan Junior Senior High School. “I think it’s a good thing to do, to help other people. It’s just a small thing you can do to make somebody happier, healthier, and make them feel loved.”

Normally, serving family style means to place the food on a table in serving dishes so people can help themselves. But in this case, the O’Connors cook and serve the food as a family.

Mary shops for the food and she and 14-year-old Claire do most of the cooking for up to 50 homeless adults. Dennis, Terry, Claire and 12-year-old Emma deliver the food to what’s called Hotel Grace at Ascension Church and they serve it cafeteria style from behind plexiglass while wearing masks and gloves. When they’re done serving, they dine themselves.

“They all really enjoy the serving part of it and just helping out,” Mary said, “and for me, selfishly, it’s a time for us to be together and work together.”

Ascension is open 24 hours a day to the homeless from Nov. 1 through March 31, and volunteers provide meals each night. The O’Connors are the only family that cooks and serves every week, according to Sandy Meindersma, a volunteer who cooked last Wednesday and who finds people to cook each night. Meindersma is impressed with Dennis and his family

“I want to take parenting lessons from him,” she said. “I’m not kidding. His kids are the greatest kids. They always have a great attitude. They’re very giving. It’s a really challenging situation with strangers that aren’t the prettiest folks because of their circumstances. They always come in with a great attitude.”

Pastor Richie Gonzalez, his wife, Elizabeth, and other volunteers founded Net of Compassion in 2010 to feed people in need. Gonzalez leads prayers before dinner at Ascension Church.

Terry admitted he was somewhat leery about serving meals during the pandemic, but he and his father continued to serve them at a shelter at North High last spring.

“The first thing you can tell really is how much they care for one another,” Madden said. “You can see that that’s a close-knit family. You can just feel it and sense it and see it as they do it. The second thing that strikes me is that they’re so unassuming. There’s a genuineness to it. They’re doing the good because it’s good and that’s its own reward. It’s really impressive and inspiring.”

O’Connor and Madden are members of the board of directors at Net of Compassion, which is seeking a place for a year-round day shelter for the homeless.

On Sundays, the O’Connors attend the 9 a.m. Mass at Christ the King Church. Dennis usually teaches catechism immediately afterward in the church’s basement, but he’s teaching it remotely this fall because of the pandemic. After lunch, the family begins preparing the food. They arrive at Ascension at 6:30 p.m. to set up and they start serving at 7 p.m. Mary remains home to clean up.

“Sometimes it’s a little chaotic, but it’s nice to see the kids working together,” Mary said, “and hopefully for a common good. Our goal was for them to look to see what they can do for the community and support it.”

Neighbors and friends have pitched in at times by helping to prepare the food or by keeping the food warm in their ovens. Last year, Maggie’s friends from her Holy Name field hockey team helped out, and next weekend Emma’s softball team, the Worcester Rockets, will help prepare the food. Brendan O’Malley, 14, and Roisin O’Malley, 12, who live across the street, have often assisted.

“It was a very big hit,” said Claire, an eighth-grader at St. Paul. “We had many people come up for seconds and thirds and they enjoyed it a lot.”

“We’re going to serve like we’re serving Jesus,” Dennis said. “If Jesus was coming to eat with you, you wouldn’t be throwing hot dogs in the microwave. You’d want to impress him.”

Mary describes herself as an adequate cook.

“I’m not by any means stellar,” she said. “As soon as Dennis gets home, I’m always, ‘How did it go? Did they like it?’ He always says yes, but I don’t know if he’s just telling me that so we will continue to do it.”

According to Claire, her father tells the truth.

“They’re very appreciative of everything that they are given from us,” Claire said, “and from everyone there and I get a lot of compliments on the food we bring.”

The O’Connors aren’t looking for compliments, however.

“It’s nice that we do it,” Dennis said. “I get all that, but I also think it’s what Christ calls us to do so I don’t think it’s worthy of a bunch of praise.”