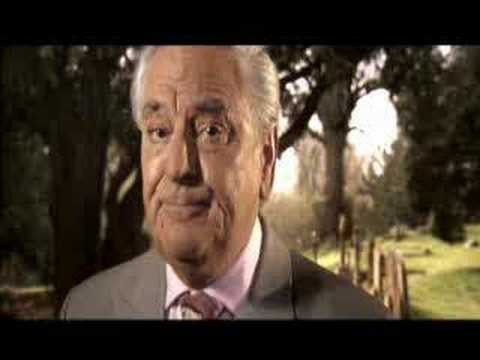 In 2003, Bob Monkhouse died from prostate cancer, a disease which is now killing one man every hour in the UK.

Shockingly, although it’s almost as common as breast cancer, it gets a fraction of the research funding.

Highly promising research projects are ready to go right now, they just need the money to get started.

This advert was made with the full support of Bob’s family, so please visit the below site and “give a few bob”

From beyond the grave: Bob Monkhouse appears in Prostate Cancer Research’s new campaign

Now, thanks to computer wizardry, he can be seen in an ad for Prostate Cancer Research’s Give A Few Bob campaign. The ad-makers took archive footage of Monkhouse and blended it with shots of a body double taken in a graveyard in Surrey.

The script is spoken by a soundalike and begins with Monkhouse saying: “Just when you thought it was safe to turn on your TV again, here I am. Gosh, four years already, doesn’t time fly.”

He goes on to tell one of his favourite gags: “I wanted to die like my father, quietly, in his sleep – not screaming and terrified like his passengers.”

And he says: “What killed me kills one man per hour in Britain. That’s even more than my wife’s cooking. Let’s face it, as a comedian, I died many deaths. Prostate cancer, I don’t recommend.”

Monkhouse’s widow Jackie, 70, told The Sun: “When I was approached about the Give A Few Bob campaign I felt it would be a great honour for my husband.

“Bob would love this ad. It’s funny but has a serious message about the threat of prostate cancer.

“They’ve done a fabulous job bringing my Bob back – although there’s a bulge in the lapel of his jacket he wouldn’t have stood for. I have the original upstairs and it fitted him like a glove.”

The campaign aims to raise donations for research into the disease.

The ad agency came up with the idea after seeing the Radio 2 promotional film in which Elvis Presley appeared on stage with the Sugababes and Noel Gallagher.